How to Come Out as LGBT(QIA+) as a Muslim 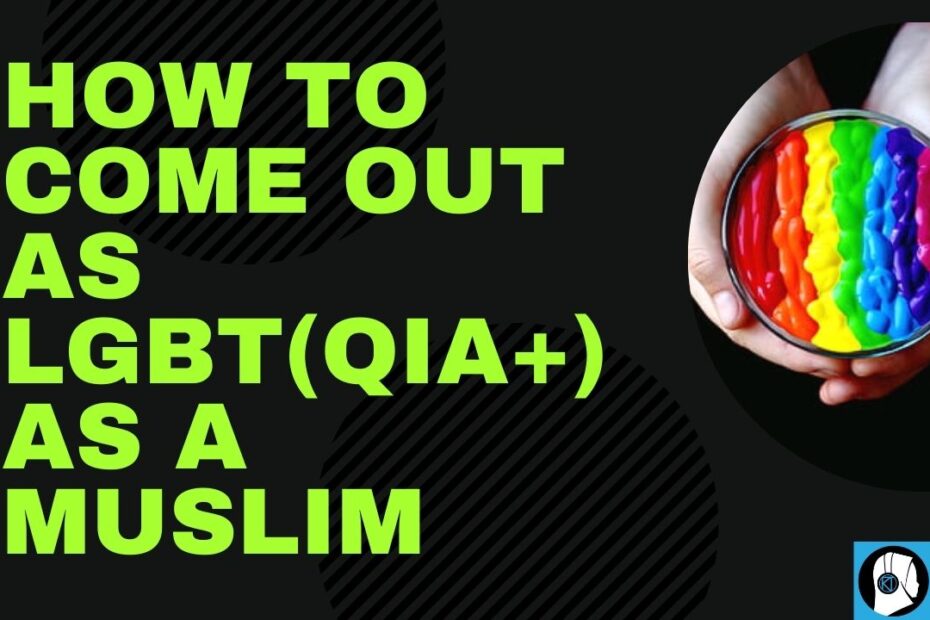 Maybe that is wondering in your head as you read the title.

Yes, I admit I purposely put such a clickbait title to lure you into reading this article.

But trust me, it’ll be worth it. Because I am actually going to tell you how to come out as LGBT(QIA+) as a Muslim.

Before that, I’m going to tell you what I’m not endorsing.

I’m not saying practicing LGBT(QIA+) lifestyle is permissible in Islam. It is clear that it is not permissible.

“Do you approach males among the worlds and leave what your Lord has created for you as mates? But you are a people transgressing.” – Surah al-Syu’ara’: 165-166

“And (remember) Lut (Lot), when he said to his people: ‘Do you commit the worst sin such as none preceding you has committed in the ‘Aalameen (mankind and jinn)? Verily, you practise your lusts on men instead of women. Nay, but you are a people transgressing beyond bounds (by committing great sins)’” – Surah al-A’raaf: 80-81

But, just as how stealing is impermissible, in real life people do it anyway. Why? Many factors. Some are desperate. Some have trauma. And very, very little amount of people, do it for just the fun and the thrill.

And similarly, to a small fraction of people who have incontrollable impulses to steal (kleptomaniac). They either submit, or try their best to resist those impulses, which significantly interferes with the functionality of their life.

I don’t know why people steal. I know some people don’t want to get the help needed so they don’t steal anymore, but I don’t know why. At least, not individually. But with the knowledge that I have, what I want to do is to help those who steal, but want to stop. Badly. Desperately. Or maybe they have come to terms that they will have that desire to steal for the rest of their life, but they want to minimize the damage as much as they can.

You get where I’m going with this?

The issue of sexuality & gender identity is not linear. It’s complex.

You the one who is reading right now. You might know someone, or you are personally struggling with this issue as well.

Why I say struggling? Because as a Muslim, I believe you do believe that this particular lifestyle is haram, and you want to change things.

(To those who are Muslim but say it’s not haram, I’m not in the position to question your Muslimness (if that is even a word). But do note that the whole article is meant for those who do believe. That is the definition of Muslim in this article.)

Next, let’s define coming out.

The usual coming out scene that we imagine is people hugging, kissing. Or maybe the other spectrum, being scolded, humiliated & kicked out of the house.

Coming out is a slang. Let’s take the action as it is; telling an intimate information about yourself.

Firstly, do you do this to everyone? Not necessarily, though some people might use it as a tool of liberation (e.g., abuse victims stepping out telling their stories to public, not just the authorities and the people close to them).

Secondly, why do you tell them? To relieve yourself from the burden of secrecy. To gain clarity (some people come out multiple time with different identities). To make people understand you better. To actually provide honest information.

Can you do that in Islam? I believe you can.

For example, you might be arranged a marriage where you know it will not be successful because your sexual orientation will affect your marriage, putting you in a position where you actually cannot afford to marry yet. And this problem will be big if you don’t communicate this important aspect of your life to them. If you tell them, then your parents will stop pushing you for marriage. Then your future spouse would be aware of the risks they will face, if they want to proceed with the marriage anyway.

I know those reactions sounds idealistic. In real life, we cannot control the reaction of others. I mean, you can choose to tell or not. Nevertheless, whatever you choose, will affect your marriage. This is just an example to illustrate the point; coming out just means telling important and intimate information about yourself. Nothing inherently haram is attached to it.

And this further applies not just to our closest ones, but to the authorities as well.

For example, you might be hospitalized, in which you have to give honest information about your sexual activities, or whether you have consumed any hormones, or applied for sex-reassignment surgery. Any wrong information can result in wrong treatment, which disadvantages you anyway. Or, you might be considering talking to a local Imam, or an Islamic organization representative about you wanting to change things around.

Again, you could label this as coming out. Inherently, it is just telling people important and intimate information about yourself. Nothing haram attached.

So that is the first step, recognize that ‘coming out’ is not haram, as it is just a slang or a label on telling people important and intimate information about yourself. It’s important to take note of that, so the stigma attached to it can be removed as well.

The second step, is to tell whoever you are coming out to, to keep it private.

“Doesn’t that beat the purpose of coming out?”

Remember that the definition of coming out is telling information. And it does not necessarily mean to all people.

It’s not about trying to keep the secret from being leaked out. Most of the time, there are things that we all know about people, but they don’t show it to us or tell us anyway.

For example, if you are a male, I might ask you, do you have a penis? Of course, you would say yes. Do you need to show me your penis? No. In fact, do you even need to answer my question in the first place? Unless I’m a doctor and you need medical attention related to the question, you don’t even have to say anything. You can walk away, and that walking away won’t give me power to say you’re not a male just because you don’t show me your penis or even answer my question.

Keeping your journey private, does not mean you’re closeted at all times. Tell the ones who are significant to you, who you care about them and you know they care about you. And be clear in your purpose in doing so. Most of the time, it’s because you trust them. And if it is to the authorities, you have every right to ask them to not tell your private information without your consent. And yes, this includes the Imam or the Islamic organization representative.

To end this, let me reiterate what I do not endorse. Practicing LGBT(QIA+) lifestyle is impermissible in Islam. It is clear that it is not permissible.

The idea of writing this article came to me as I contemplated, “What if someone who is close to me admitted that they practiced LGBT(QIA+) lifestyle?”

It took me a while, that most of the time, if people close to me do come to me and tell that, it’s because they trust me. And for a while, they have to carry the burden of secrecy while interacting with me. And as someone who is close to me, and who knows I care about them, they don’t want that.

How to handle people coming out to you as a Muslim? Maybe that’s another writing to come. My point is, people coming out you is not necessarily them being proud of their sins, or wanting to oppose Islam. Most of the time, it is because they trust you.

I hope this article benefits those who are reading. Whether it’s you considering to come out, maybe even wondering if that is even haram in Islam. I hope this clears things out a bit.