Cycle of Winning & Cycle of Losing 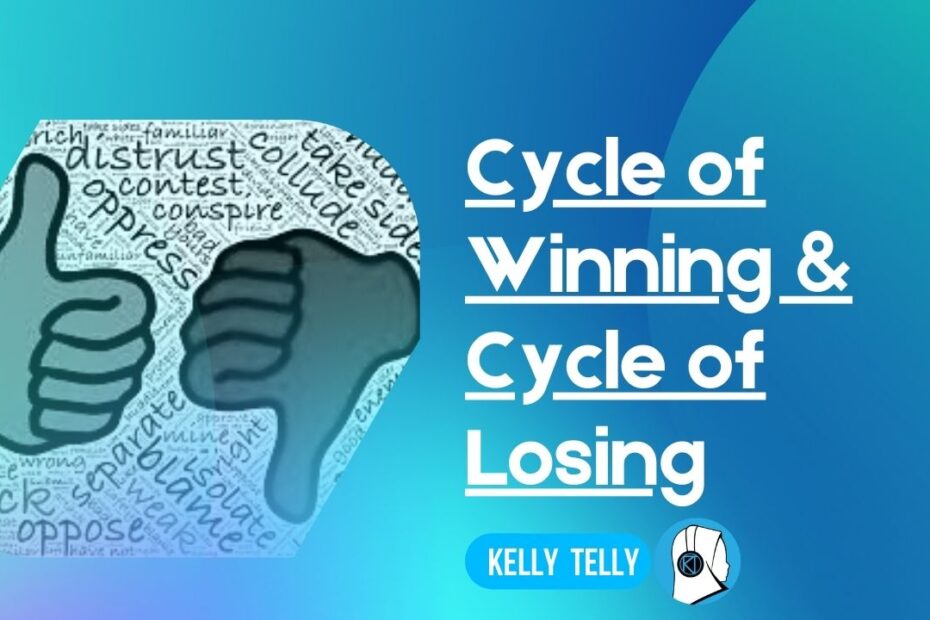 Have you ever watched that episode of SpongeBob where he breaks his butt while sand-sledding?

Yeah, his bottom shattered, and at the hospital, he was told that one more injury like that & he may end up in the “iron butt”. So SpongeBob went on “around-the-clock butt patrol,” and it seemed like the entire outside world is out to break his butt. So he changed, deciding to stay home forever.

Think about it. SpongeBob is one of the character I’ve known to take many, many, risks. He did not afraid of almost anything. But, at least in regards to that particular episode, after that accident, he doesn’t go out home, he works from home, and makes friends with inanimate objects.

“The world is dangerous.”

The same thing could happen to us.

No, I don’t mean you can shatter you bottom while sand-sledding & still magically be alive.

That particular failure or mistake will make us paralyzed by shock, shame & fear. And as a result, we change our risk-taking behaviour, and we drastically reduce it.

“The world is dangerous.”

But, the thing is, our risk-taking behaviour is the one that keeps us in a winning cycle, and avoids us from being in a losing cycle.

“What is a winning & a losing cycle?”

Think about it. When you take appropriate, well-thought risks, you will fail at some time. But since they are appropriate & well thought in the first place, most of the time you will win. If you fail, then you’ll learn, and move forward to take more risks. As a result, you will encounter more risks to take, which means you gain more opportunities for success. This reinforces your risk-taking behaviour. This is the winning cycle.

But, when one of those risks makes an unexpected turn, and makes you encounter such a huge failure that affects you mostly emotionally, you will reduce your risk-taking behaviour. Survival-wise, this is understandable. But, as a result of this, you will take less appropriate, well-thought risks, and as a result, experience less success.

Why would you experience less success?

1. You will become stagnant in your current life
Humans are the ultimate adaptation machine. There is no animal that can adapt like humans. But when you consciously decide to reduce your risk-taking behaviour, you won’t be able to adapt with the growing world. You won’t grow, although as you go further in life, you need to grow.

2. You will shrink when you go further in life

Let’s imagine a new scene in the SpongeBob episode. What if, suddenly with whatever means, Gary dropped some old food, and Spongebob does not have the guts to go & clean it up (being stagnant)?

If that old food does not get cleaned up, animals like ants, cockroaches, flies & bacterias will consume that old food, and as a result living in the same environment as SpongeBob lives. As a result, he lives in an unhealthy & unhygienic environment. And due to that, he will get sick (shrinking).

This is what I meant by ‘shrinking’.

This is the cycle of losing.

Do you remember, when Patrick & Sandy are being attacked by the gorilla, Spongebob blamed his friends?

“The world is dangerous, I told you so, this is the consequences.”

But finally, he made that conscious decisions to go out & save his friends.

What does this mean?

But learning your lesson from that big failure, moving on & continuing that appropriate risk-taking behaviour is a must.
It’s not a choice. It’s a must.

Because, if you don’t do that, you’re the one who will suffer the consequences. You will lose your values, you loved-ones, your source of confidence, your source of joy & laughter. That, to me at least, is a much bigger failure.

It’s hard, it’s really hard. I know I understand. Because I learned this the hard way. I wished I learned this earlier. I wish someone would say this to me when I was grieving my failures.

So I’m not writing this to pressure you or anything.

Take your time to grieve. Take your time to heal. Take it.
I’m just writing this to let you know that, after that big failure, after grieving & healing, please do not decide to reduce your risk-taking behaviour.

You might think that by doing that, it will significantly help you to barricade yourself to more failures. But in reality, you are barricading yourself from the cycle of winning. And, especially after that big failure, I’m sure you’re fine with ‘not winning’.

But, when you barricade yourself from the cycle of winning, you are more prone to be in the cycle of losing. Because continuing to be yourself, to be your best self, is the only way you can get up back in life. Despite how contradicting it might seem, it’s the only way to make sure that you don’t fail & lose more in life.