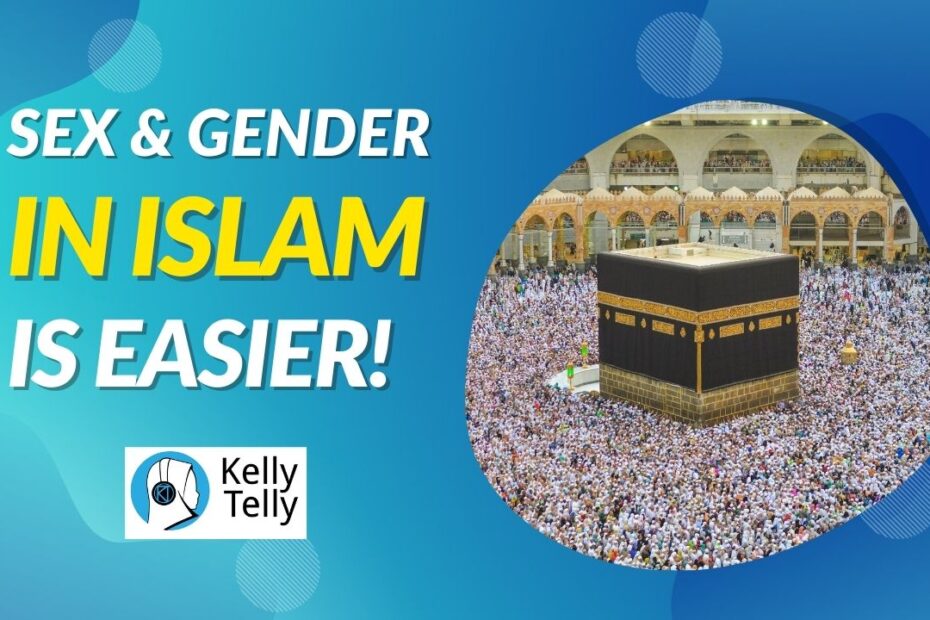 Sex is defined as either of the two major forms of individuals that occur in many species and that are distinguished respectively as female or male especially on the basis of their reproductive organs and structures.
Gender is defined as the behavioral, cultural, or psychological traits typically associated with one sex.

Nowadays, in the rise of the awareness of gender & sexuality, people are identifying themselves with lots of new terms, under one umbrella designed to be inclusive to everyone.
This has clearly caused confusion to Muslims as we have run millennia of civilizations with the differentiation of roles between male and female.

But, what if I told you, despite what you think,
the definition of sex & gender that I’ve mentioned just now, does not contradict with Islam?

Sex is binary, gender is a spectrum.
Which means, you are free to express yourself in the spectrum, but you identify ultimately with yourself. Meaning, what is biologically you.
Thus, you may be free to do whatever you want in the gender spectrum, but the rulings applying to you are the sex-constructed rules & regulations in Quran.

I’m not saying they are all allowed in Islam. Halal & haram, that’s another story to be told. My point is, whatever you do to match yourself with the other sex so you can identify as their gender, you would still be identified according to your sex in Islam.

And I’m not saying it in a bad, restricted version too. Like, I actually understand all of new terms about gender & sexuality, designed to address customs issues. And personally I learn a lot from them.

I’m just saying, in Islam, those terms are not needed because it’s simpler already.

Because, there are also Muslims spreading the ideas that LGBT are actually allowed in Islam, although sex-constructed rules are one of the type of rules being the most clarified in Islam.
It makes me wonder genuinely, why they pull such a lot of efforts to do so?

One possibility that I could think of, is because we Muslims are not acknowledging them as Muslims too. They want to live the life that they want, but want to be Muslims too. Thus, a branch of ‘reformed’ Islam is born.

Thus, here is the answer to the popular question of “Do Islam accept LGBT people?”, can be answered in 2 ways.

Islam definitely do not accept other way of life including new sexuality and gender identification, apart from the simple one that Islam itself provided; you identify yourself with what you’re born with biologically.
But, does people who have these different sexuality and experiencing like they belong to the opposite sex, are excluded from Islam? Definitely not!

Islam is for whoever who witness Allah is the one true God & Muhammad is His final messenger. As long as someone believes in these two things, they are Muslims and they are entitled to every single right of a Muslim; which may include not being talked-behind, dealing with other Muslims professionally, getting inheritance, and others.

I understand that I might sound too laid back, and the practicality of this principle is not as simple as it sounds.
I understand that behaviors regarding gender & sexuality are not small & petty things in Islam that we should shut our eyes from.
I understand, that without strict regulations from Islam, LGBT people in Islam could go way across the line, that could actually jeopardize their position as Muslims.

Thus, let me clarify that I’m talking about this in a larger sense, to the majority of people. Rulings, what’s halal & haram, are not my specialties. In addition, real-life application always differs.

But what I uphold is, I should not discriminate against others regardless of their gender & sexuality, even if I disagree with them. Apart from certain behavior that Allah do order us (for example, not letting males identifying as the other gender enters women’s bathroom, as this would expose the women’s aurah), I would not add on other types of injustice on them, and I would not withhold them from any other of their rights as a human & as a Muslim.

I would not let my beliefs & feelings towards a certain group of people abstain me from being just & fair on them. (Quran 5:2)

Speaking of which, I do have my messages for the LGBT Muslims.

You are a Muslim.

In case you forgot.
In case people around you keep telling that you’re not.

As long as you believe Allah is the one true God & Muhammad is His final messenger, you are a Muslim. No one could take that away from you. Whoever condemns you to be lower than you should be, please remind them back with chapter 5 verse 2 of the Quran as I’ve attached above.

You are a Muslim & you are entitled to every right that every other Muslims have.

With that being said, as you believe Allah is the ones who created you, I pray that you will continue to have faith in His restrictions, even if just a little.

He created you, He knows what’s good & not good for you. He does not prohibit or order something for nothing. (Quran 5:115)

In addition, by reminding you’re a Muslim, please remember that Allah who is Ar-Rahim, has love for Muslims all around the world, including you. Whenever you are having a hard time, remember that Allah loves you for who you are, Allah sees your effort and does not dismiss you, gives you courage.

I hope you will gain strength to actually identify yourself with the words that Allah is pleased with.
And despite what’s going on the outside, I believe this is a very hard task for you. Again, just remember when nobody is on your side, when you are feeling outcasted by either the Muslims communities or the LGBT communities, Allah is always on your side.

Yes, simple does not mean easy.