What is Autism… Really?

What is Autism Spectrum Disorder?
A disorder of…?

Granted, the answer to the previous two questions can be simplistic. But my point is, at least we know what it’s about.
But when we search the definition of autism, there’s not much to understand. We just understand that there are behaviors clustered together to form a specific disorder.

“Autism is a neuro-developmental disorder (not neuro-cognitive!) that manifests itself in the following symptoms; saying things over & over (echolalia), flapping hands, obsess with certain things, blah blah blah…”

Even studying child psychology for 3 years, I had a really hard time understanding what autism really is.
Until one day I get to be an MC at Celebrating Autism Awareness Through Fashion, at Wisma Tun Fuad Stephens, Kota Kinabalu.

One of the speakers, Madam Ruth Arunasalam, the founder of Ruth Training & Development Academy, explained it very simply.
It’s so simple that I feel stupid of not understanding it in the first place. But then, I understand as well that it’s a thing that a lot of people miss. Once you get this gist, Autism Spectrum Disorder will become more clear in your head.

The answer that we seek, is in the word itself.

The word ‘autism’ comes from the word Greek, which means self.
And from that, Japanese give this name to autism: jieheishou
It is comprised of three ideographic characters, whose individual meanings combine together to form a compound word:

Autism is a disorder where by the person being closed or shut within one’s self.
They cannot get out from their own world.
They are not wired in their brains to even do so.

I have a friend of mine, who’s diagnosed with ASD.
Here’s the thing; I’ve never seen her as someone who’s autistic. Like, someone who’s abnormal. Not before, not even after the diagnosis. To me, she is just who she is.

One day, upon knowing her diagnosis, she said to me: “I’m sorry if I cannot read you, I just can’t.”

I remember being baffled with this. I was like, what do you mean you’re sorry? What I know is, she just does not care about people. She just says things as it is. I just thought she’s someone who won’t bother things.

But only now, I understand what she was trying to say.

Another episode, I remember a conversation I had, with a stranger, upon knowing that I’m studying children & family psychology. He said he has a relative that is autistic, and he asked me how to ‘cure it’.

I just said, “You don’t cure autism. Autism is not to be cured.”

“Imagine you’re in a group of people speaking English, and there’s only 1 Mandarin speaker. Both of you don’t understand each other, and your group perceive the Mandarin speaker as ‘not normal’.

But, in reality, to function, do you need to wipe out his Mandarin & install full English in his head? Of course not, right? The most important thing is, you need to learn the basics of Mandarin to communicate with him, and he needs to be taught on basics English so he could communicate with you.”

Let’s expand more on this analogy.

Not only does the Mandarin speaker can’t speak English, even learning English is a challenge. With new letters, new characters, new grammar rules, and a whole bunch of things that mostly may not make sense to him. As a result, what is perceived easy for those English speakers, maybe could be 10-100 times harder for the Mandarin speaker.

The same goes with autistic people who are enclosed in their world. And especially for children with severe autism, the easy things we do on the daily basis like eye-contact, handshake, listening to order, reading social cues, may be like climbing Mount Kinabalu to them (example given by Madam Ruth).

That is why it is crucially important for us to at least try to understand them. Because they can’t understand us, no matter how bad they may want to. Their brains are just not wired to do so.

But we can. We have the capacity not only to understand normal behaviors, but also the abnormal ones, their behaviors, and how we should respond & react to them.

What will happen if we don’t?

Madam Ruth told another story, of a student in her class with ASD, who would abruptly interrupt her lecture just to read to her a poem. When that happened, she would usually just ask the student to postpone her poem-reading until around 5-10 minutes before the class was over.

But, that’s not how it goes when that student is in the other class, with another lecturer, who does not understand about autism. When the student was again interrupting, he was being scolded badly.

You know what that results in?

Self-harm. By the student.
Don’t bother the details.

Again, for those who is not autistic, of course we would not do that in the first place. And even if we do, the least we would feel is annoyance & anger towards the lecturer when being scolded. Because we understand.

But, for those who is autistic, they don’t. They don’t understand. They can’t understand.
And even if they have struggled their way in therapy to ensure their social functionality, that might take a huge toll on their emotionality in a way that we cannot imagine.

I’m only iterating the example being said in the event, which could be an outlier case anyway. But my point is, we must take initiative to try to understand them, because we have that capacity while they don’t, even if they want to.

“But how do we do that? You said yourself they are shut in their own world. How can we connect with them when you said they can’t in the first place?” 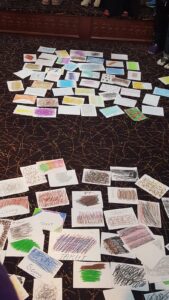 There’s an activity at the event, where the participants are asked to color their emotions. Then, we compile all of them.

Do you know what this means?

Autism, although a disorder being characterized as being closed or shut within one’s self, manifests in similar behaviors. Like I said, although we may not know before what autism really is, we can already identify the behaviors that indicate the disorder; obsession over an object or topic, lack of social and communication skill, etc.

And even for non-autistic people, our world may be unique, individual & different. But we all universally have similarities.

No matter how closed people are in their own world,
there will always be keys to open them up.

I hope this gives hope.

You might be someone who is diagnosed with ASD. Don’t give up hope that you will be cut off from people forever. There will always be methods to connect. It’s a matter of time before you find them.

You might be someone who is a caretaker, or a friend, of someone with ASD. Don’t give up hope that you will be cut off from them as well. There will always be methods to connect. It’s a matter of time before you find them.

And even outside the realm of ASD, if you feel like you’re frequently misunderstood, don’t give up hope. There will always be methods to connect. If this is true for people with ASD, this is definitely true for you too.